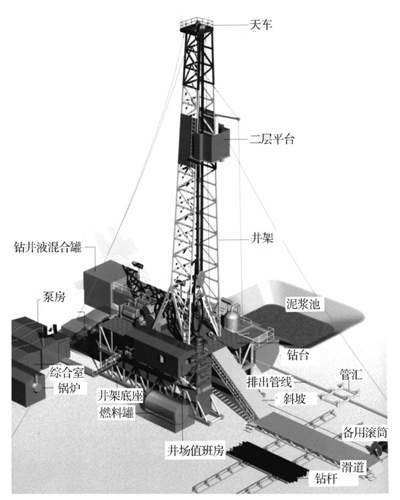 (2) Rotating system. It is used to drive the drill to rotate, break the rock and deepen the wellbore.

(3) Circulatory system. It is used to circulate drilling fluid to clean the bottom of the well and carry out the broken cuttings to ensure continuous drilling.

(5) Transmission system. The main task is to transfer and distribute the energy of the power plant to each working machine.

(6) Control system. In order to direct the coordinated operation of the various systems, various control devices, such as mechanical, hydraulic or electric control devices, equipped with centralized consoles and observation and recording instruments, are also installed in the entire drilling rig.

In order to start and lower the drill and unload the drill, manual wellhead tools such as tongs, elevators and slips are required.

The tongs consist of several jaws and shank with dental plates that are hinged to each other. The clamp is used to unscrew the connecting thread of various downhole tools that make up the drill string, such as drill pipe and drill collar. The tongs are used inside and outside (one right and one reverse) in pairs, and the cat's head rope is used to turn the buckle.

With the rapid increase in the number of deep wells, hard formations, and offshore drilling, the workload for start-up and drill-down operations has increased significantly. The use of the above manual wellhead tool for unloading the thread is labor intensive, low in work efficiency, and unsafe, and there is an urgent need for improvement. At present, various forms of power tongs and power slips are widely used in drilling production. It speeded up the drilling and drilling speed, reduced the labor intensity of workers, and laid the foundation for further mechanization and automation of drilling work.

Blowout may occur when the wellhead blowout preventer opens the high-pressure oil and gas layer, causing serious accidents. In order to control the drilling fluid and the injection of oil, gas and water in the well when the blowout occurs, a blowout preventer is usually installed under the drill floor. At present, the rigs produced at home and abroad are equipped with a complete set of more perfect blowout preventer systems. The BOP combination with a pressure rating of 21 to 34 MPa.

The drill string is a general term for all the columns from the drill bit to the ground. The drill string is a hub connecting the ground and the underground, and is an important means and tool for achieving high-quality and fast drilling. As drilling depth continues to increase, drilling technology continues to evolve and performance requirements for drill strings are increasing. At present, a composite drill string composed of one or several kinds of drill tools has been widely used with anti-slanting, anti-shock, anti-sliding and the like. The composite drill string cooperates with different process measures to control the change of the well inclination, improve the working state of the drill bit, reduce the stuck drill accident, and obtain comprehensive benefits in many aspects.

The drill string consists of a number of different drills. The composition of the system varies with drilling conditions and drilling methods. The basic drills that make up the drill string include drill collars, drill pipes, kelly bars, and mating joints.

The drill pipe is connected between the drill collar and the kelly. Both ends of the drill pipe are provided with joints for interconnection. Drilling workers are accustomed to refer to a single drill pipe as a "single root", and when two or three drill pipes are joined together, it is called a "standing root."

Matching joints Due to the different types, sizes and buckle types of drills that make up the drill string, they are generally not directly connected to each other. It is necessary to use a joint to join a uniform and harmonious drill string.

If the anti-slant drill string formed by adding the centralizer is properly designed and used, it can prevent the inclination and make the wellbore rules, ensure the smooth operation of the drill bit, and improve the work index. Practice has proved that these anti-slant measures are effective.

Due to the different nature of the rock fractured by the drill bit and the different drilling objectives and requirements, many different types of drill bits, such as scraper bits, roller cone bits and diamond bits, are used in oil drilling. The most widely used is the roller bit, which is used in medium hard and hard formations as well as in deep wells. The scraper bit has a prominent position in some high-plasticity and soft strata in China. Diamond drill bits work well in very hard formations and deep wells. With the development of drilling technology, the type and structure of drill bits are constantly evolving and improving. After the 1970s, drill bits with synthetic diamond as the cutting element appeared. Years of on-site use have proven that this drill has a good development vision.

The scraper bit is one of the earliest drill bits used in rotary drilling. The drill bit has a simple structure and is easy to manufacture, and each oil field can be designed and manufactured by itself. The squeegee bit is suitable for drilling soft formations (such as mudstone, shale and argillaceous sandstone formations) and can achieve high mechanical penetration rates and drill footage. However, when drilling hard and highly abrasive formations, the blade is difficult to eat, the drill bit wears quickly, the mechanical drilling speed is low, and sometimes the jumping phenomenon occurs, which has a certain influence on the life of the drilling tool and the equipment. Nevertheless, as long as we use it correctly, we can fully utilize the advantages of the blade bit drilling in the soft formation, which is still effective for improving drilling speed and reducing drilling cost.

The roller bit is the most widely used bit in oil drilling. When the roller bit rotates, it has the effect of impacting, crushing and shearing the broken rock. The contact area between the teeth and the bottom of the well is small, the specific pressure is high, the working torque is small, and the total length of the working edge is large. Thus, the roller bit can be adapted to rock of various properties. The commonly used tri-cone bit is shown in the Figure. 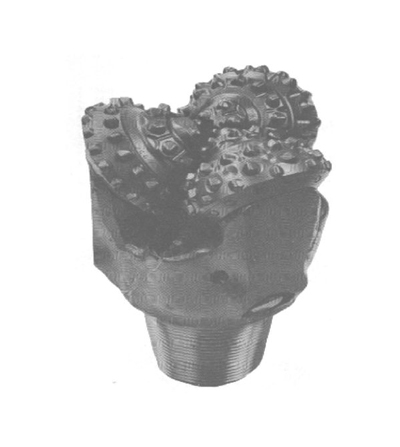 According to the characteristics of the teeth, the tri-cone bit products are divided into two categories: milling bit and insert bit. There are six series of milling bites and two series of inlay bits.